It was in 1897 that such loyal and sturdy Scots as McMurrich, Wenley, Cushny, and Craig began going out into the country near Ann Arbor with those queer looking bags, filled with broom handles, hung over their backs. These men and a few others sowed the seed which germinated into the first golf club in Ann Arbor.

The precise beginnings of Ann Arbor Golf & Outing Club are obscured by the mists of time. It is known that golf was informally played in this location in the 1890’s, players arriving on foot and by horse to pursue their sport. It was an out-of-the-way location then, well before the UM sports complex and Stadium Boulevard.

UM professors from Scotland, Dr. McMurrich and R.M. Wenley, introduced the sport to the area and on September 26, 1899 things took a more organized turn when the first general meeting of the “Ann Arbor Golf Club” was held. The club leased a farm on Ann Arbor-Saline Road (Main Street) for three years and in 1903 purchased the property. A new club was formed – Ann Arbor Golf and Outing Club.

The new 40 acre tract, purchased for $4,000 had 10 acres in corn, the rest in pasture. “The corn, having matured, was gathered. The corn land was plowed, harrowed and seeded; the pastureland was harrowed and seeded and rolled … and a flock of sheep pastured there a year or two to do the mowing.”

AAGOC has been a “town and gown” organization since its very beginning. 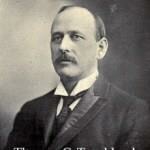 Thomas C. Trueblood (1856-1951), a UM professor, was a founding father of the club. A nationally known orator, superb athlete, and indefatigable organizer, he explained his 1901 golf success – “I took it up in August and in October I won the Ann Arbor Golf Club championship.” To Fielding Yost, UM Athletic Director he remarked, “Golf is the finest game – all life sport – I have ever known. Why shouldn’t it be a varsity sport.”  The rest is history as Trueblood, off and organizing, started the UM Men’s Golf Team and became its first coach.

Fielding Yost (1871-1946) was interested in AAGOC too; in a letter to the club dated March 17, 1925 he notes that while there had been no official action, several individuals were giving thought to the possibility of a new football stadium. He himself had been making a “personal investigation” of various sites that might be suitable.

The location I have been drawn to is the site of the Ann Arbor Golf and Outing Club, and as a result of various surveys made, I have reached the conclusion that this property would serve the purpose better than any other.

Happily, the members held another opinion! 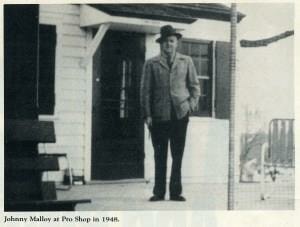 One figure stands especially tall in the history of AAGOC – the affable, talented Johnny Malloy. On November 11, 1918 as a 12-year old boy, he was walking down the seventh fairway when he heard the church bells announcing the Armistice. Four years later he left school and went to work at the club, driving the horse-pulled 3-gang mower and keeping the water pails and sand containers filled in an age when players teed up on tiny mounds of wet sand.

For 45 years, Malloy was a AAGOC mainstay, working his way up through a succession of assignments and titles to become manager and the first full-time golf professional. With almost legendary winning ways on and off the course, he held many club records and the hearts of members one and all. His pro shop was a little “pop stand” to the east of the clubhouse, and later a small, unpretentious space within the building and hard by a water heater.

Malloy held the Michigan Amateur Championship three years running, in 1927, 1928, 1929, and is in the Michigan Hall of Fame. He retired in 1967, and today AAGOC pays homage to him with the Johnny Malloy Lounge and the men’s Malloy Cup.

AAGOC is proud of our unique history and cherished traditions.  Today it stands as one of Michigan’s oldest continuing golf clubs.